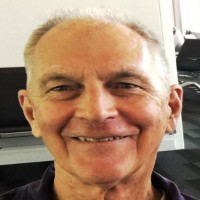 Mr Stephani has a Bachelor's degree in Social Science from the University of California at Berkeley and a Master's in Regional Planning from the Syracuse University Maxwell School of Citizenship and Public Affairs. He served as a volunteer in community development it the United States Peace Corps in Colombia, South America;  a New York City Urban Fellow in the Mayor's Office of Mayor John Lindsay; and has worked for Planning Departments in: San Diego County, California; Benton County and the City of Albany, Oregon, where he also served as a Councilman on the Albany City Council, and a County Commissioner for Linn County.  In 1987, Mr. Stephani was appointed as the first Town Administrator for the Town of Frisco, Colorado. His first year there is chronicled in the book he and his wife authored entitled ON BECOMING A CITY MANAGER. In 1990 he was appointed Town Manager of the Town of Cave Creek, Arizona, where he and his wife wrote - and the National League of Cities published - ZONING 101, which is now available in its third edition through www.amazon.com. He also served as the Community Development Director of the Town of Paradise Valley, Arizona, and Town Manager of Gila Bend, Arizona. He was most recently employed by the Central Connecticut Regional Planning Agency as its Executive Director. Mr. Stephani is a Life Member of the American Planning Association (APA), and a Lifetime Credentialed Manager of the International City/County Management (ICMA) Association. He has authored dozens of nationally published articles on management and planning and has been a guest speaker at numerous national conferences of the ICMA, the APA, and many other national organizations involved with city government and planning.  He also served as a member of the US Environmental Protection Agency’s Local Government Advisory Committee and National Drinking Water Advisory Council.  He is a co-author/editor of the following handbooks of best practices published by the McFarland Press: CITIES GOING GREEN, GLOBAL MODELS OF URBAN PLANNING, and URBAN TRANSPORTATION INNOVATIONS WORLDWIDE. In 1993, the Small Towns and Rural Division of the APA recognized the Town of Cave Creek Zoning Ordinance, which Mr. Stephani authored, as the Division's Outstanding Project for the year because of its policy effective and user-friendliness.